One research topic that is eye-catching and often appears in national news is that cultural background affects the way people perceive things.  In fact, the claim is more general than visual perception.  It postulates that Western Europeans and North Americans think differently than East Asians (Nisbett, 2004).  To give a visual perceptual example, Kitayama et al. (2003) reported the following study in the prominent journal Psychological Science.  Participants examined a line inside a square and then, inside a different square, reproduced from memory either the absolute length of the examined line or the proportion of the line’s length to the square.  They found that North American Caucasians reproduced the absolute length more accurately than East Asians, whereas the East Asians reproduced the relative length more accurately.  The theory is that North American Caucasians attended more to the object itself and were less influenced by the context, whereas East Asians attended more to the contextual, global aspects of the scene. 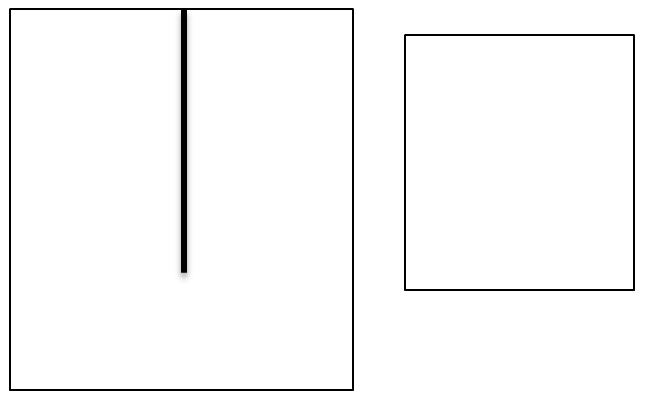 FIGURE: An example study.  Human participants first look at the figure on the left (a line in a box), and are asked to remember the length of the line.  They are then shown a new empty box (figure on the right), and are asked to draw the line in the new box either in the same absolute length or in the same proportion in size with respect to the new box.  Previous studies found that East Asians outperformed Caucasians in the relative task, but underperformed in the absolute task.  We repeated the study and found that the relative task was easier than the absolute task for all participants, including East Asians, East Asian Americans, Caucasian Americans, and other Americans.  We also have a simple explanation (which is long known in the field of visual perception): the box provides a visible and useful frame of reference, making the relative task objectively easier than the absolute task, in which participants have nothing visible to rely on but their memory.

Much of the cross-cultural research has been done in social psychology, with relatively little research conducted by perceptual psychologists.  We attempt to use modern day experimental design and methodology to carefully investigate cross-cultural questions.  We have a unique advantage in that we have trusted collaborators in China and an incredibly ethnically diverse campus.  At UCLA, we have newly arrived students from East Asia, students originally from East Asia who immigrated to the US before college age, and US-born East Asian Americans.  Of course, we have even more Caucasian Americans.  This potential pool of participants offers excellent resources for cross-cultural studies.

We now return to the line in a square study mentioned earlier.  From the outset, before any cultural considerations, there is a well-known notion in the perceptual literature called frame of reference. In the current context, the frame of reference makes the following arguments:  when trying to remember a line’s relative length with respect to the square the line is in, one can accurately estimate the length as ¾ of the square, for example.  Therefore, when a participant is asked to draw a new line inside a new and empty square, one can use the new square’s size as a reference to draw the line ¾ as long.  However, when one is asked to remember the absolute length of the line, no helpful frame of reference exists, leading to less success.  In other words, the frame of reference idea suggests that judging absolute lengths will always be more difficult than relative lengths. This is exactly what we have found with data from every group of participants,  including students in China, UCLA students from East Asia, UCLA students of Western European origin, UCLA students of Asian Americans, other UCLA students, and investment bankers in Los Angeles.  Our experiment replicated the Kitayama et al. (2003) study by the letter, but our results were different, and the reason for this remains unclear.  But we are conducting other studies.  Meanwhile, we hope that other research labs can replicate this study in order to figure out exactly what is going on.